In American Standard English “Juneteenth” is a contraction of June and fourteenth or nineteenth. It is the series of events that slaves were set free from slavery from 1862 to 1866.

Juneteenth is the oldest known commemoration of the ending of slavery in the nation.

“June 19th, 1862 Slavery outlawed in US territories” … Lincoln seemed to believe in the domino theory to end slavery, i.e. stop its spread in one place and one by one the other dominoes would fall, affecting gradual emancipation nation-wide.

As early as 1837 in Illinois, Lincoln had argued to abolish slavery in the District of Columbia, but he was in a dreadfully small minority.  Again Congressman Lincoln proposed abolition in D.C. in 1849, but could not get the votes thru Congress.

Early in 1862 with the Civil War less than a year old, Congress, with Lincoln’s approval, emancipated the slaves of D.C. on April 16th.   And then a few months later Lincoln, with Congress’ approval, signed the order to “Abolish slavery in the US Territories” on June 19th, fulfilling a campaign promise made as early as Lincoln’s Peoria Speech in October 1854, the Juneteenth of 1862.

The oldest Abolition Society since 1775 of Philadelphia, Pa had sent Ben Franklin to

the first federal Constitutional Convention to argue against slavery, but he couldn’t get the votes.  On Juneteenth, 1863 following the Emancipation Proclamation, the Society formally endorsed and enforced Lincoln’s Order and built Camp William Penn to recruited tens of thousands of Negro soldiers for the Union Army.

June 19, 1863 Orders to authorize the formation of the USCT by the War Department.  The Union Army was threatened with thousands of soldier desertions, while, the threat of “RE-enslavement” was a cloud hanging over the heads of every African American if the Confederacy should win the war.  Who best to face the threat and the willingness to fight against slavery than the US Colored Troops.

June 19, 1865, General Order #3 issued in Galveston, Texas.  There are significant historical information gaps in just what took place in Galveston, Texas on the day of the original JUNETEENTH.  The historic accounts vary wildly from a noisy celebration to almost unnoticed, depending upon the studied sources.

General Gordon Granger a cavalry officer promoted for his fight to capture Mobile, AL at the close of the war in the South, which included USCT soldiers from Florida.  However, the OR, Official Record, does not reveal exactly how Granger and his horse got from Mobile to Galveston, nor who traveled with him; no record showed if it was by land or by sea.  The record does show Gen. Granger was among the first Union officers to arrive in Galveston on June 18 to assess the situation there.

Moreover, two ships, the Wilmington and the William Kennedy, contracted at City Point, VA, for two Regiments of the US Colored soldiers, the 29th of Illinois and the 31st of New York also arrived on the 18th, by accident.  Those two units were originally dispatched to land at Brownsville, TX, but a storm at sea prevented a landing so they found a safe harbor at Galveston also on June 18th.  So General Grainger and two armed units of Black soldiers enforced the first “Juneteenth Freedom Day” and it has been celebrated every year since 1865.

But there were more slavery dominoes to fall, with freedom flowing north.

This marked the end of slavery among Native Americans. With elements of the 13th, 14th, and 15th Amendments written into the treaty, it allowed for 50 to 100 all-black towns to evolve into Black Wall street and the first 5 black millionaires in America

And on into the 20th century, JUNETEENTH.

And June 19, 1968, Poor People’s Campaign Solidarity Day March, Washington D.C. to try to improve economic opportunity for African Americans, while the struggle for equality of educational opportunity is an ongoing goal.

Juneteenth has been an African American tradition since 1866. Economic and cultural forces caused a decline in Juneteenth celebrations beginning in the early 20th century. The Depression forced many blacks off farms and into the cities were employers were less eager to grant leaves to celebrate Juneteenth.

In 1968, Juneteenth received a strong resurgence through Poor Peoples March to Washington D.C. Rev. Ralph Abernathy’s call for people of all races, creeds, economic levels and professions to come to Washington to show support for the poor. Many of these attendees returned home and initiated Juneteenth celebrations in areas previously absent of such activity.

As of 2018, 45 states and the District of Columbia have passed legislation to officially recognize Juneteenth. The NJOF directly contributed to 42 states legislation.  The annual Congressional Juneteenth Reception, hosted by members of Congress, and the National Juneteenth Prayer Breakfast are now Washington D.C. traditions.

HISTORY OF THE JUNETEENTH FLAG 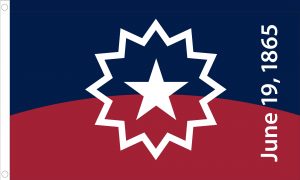 The Juneteenth Flag was created by former NJOF Massachusetts Juneteenth State Director and Founder of the National Juneteenth Celebration Foundation (NJCF), Ben Haith, in 1997. The flag underwent a revision in the year 2000 resulting in its’ present modern day design. In 2007, the phrase the “June 19, 1865” was added to the flag to place the historic date that Juneteenth occurred in Galveston, Texas

Haith spearheaded the historic first Juneteenth Flag Raising Ceremony in Boston, Massachusetts in 2000. The tradition of raising of the Juneteenth Flag at the Dillaway Thomas House at the Roxbury Heritage Park on the “19th of  June” continues to this day.

Today, Juneteenth Flag Raising Ceremonies have taken place throughout the month of June in communities across the nation, including Boston, MA, Memphis, TN, Galveston, TX and Omaha, NB.

The JuneteenthFlag is a symbol that gives all Americans the opportunity to recognize American freedom & African American History.

The JuneteenthFlag represents a star of Texas bursting with new freedom throughout the land, over a new horizon.

The JuneteenthFlag is created with American red, white, and blue colors.

Get Your JuneteenthFlag & American Flag Sets & Other items for your home, your workplace, organization and your Celebrations.

The JuneteenthFlag & American Flag Sets & Other items are now available for all Americans who cherish and stand for freedom. 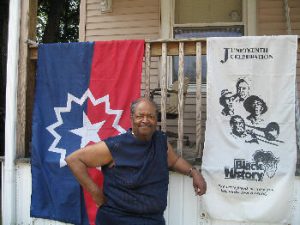 Ralph Browne, Director of the Massachusetts Juneteenth Holiday Campaign, stands
before his house on How Street flanked by two flags that celebrate Juneteenth, the
holiday he recently helped get recognized by Massachusetts as the end of slavery.
Dave Benoit, photographer